Something good for a laugh

Yes am still alive and kicking...just been so busy of late I barely have time to hit any of the blogs, let alone update this one.

Rest assured that I hope to be able to slow things down some and be able to hang out here more and do stuff I want to really do.

Oh and I have three words for the recent fun in Afghanistan....'raging dumpster fire'

Check it out, and put in your $25 for a chance to win...
Bayou Renaissance Man: Exactly two weeks to go!:   Just a reminder that our raffle for an AR-15 pistol closes on May 31st.  You've got just fourteen days to get your entry in, as per th...
Posted by Mark J at 12:53 AM No comments:

Finally, a farewell to Fry's Electronics

Fry's Electronics is a well-known (on the west coast) electronics and computer outlet.  They have had a store here in Vegas since the late 1990's, and I have built several computers from the parts I have purchased from them, as well as a goodly amount of DVDs for my collection.

During the past 3-4 years, the quality of goods available at Fry's had steadily decreased, along with a seeming inability to restock their inventory.  Various folks, me included, have figured it was only a matter of time until they finally fold up. 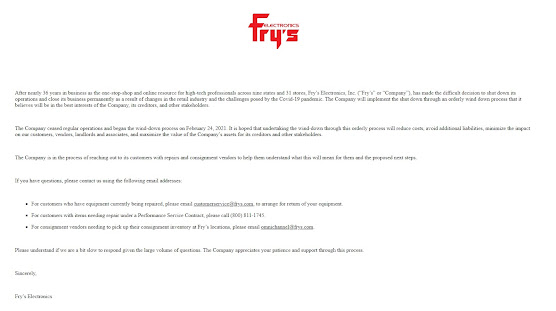 So it's finally consigned to history.  All I can say is that it was fun while it lasted,

New year, hopefully a better one

Now that the new year is on us, there is some cautious optimism that this one should be better.  With old 'Sleepy Joe' about to take over from 'The Donald', it should get interesting on the political front.

On a personal note, I did get my first COVID-19 vaccination this past week.  I got the Moderna vaccine, which will require a second shot around the first of next month.  Although I have already had been infected and suffered through this crud, it's still a good idea to get the vaccine; if nothing else, it will keep my immunity boosted.  As for side effects, the only noticeable one was just pain at the injection side, which at its worst lasted about 2 days, then subsided.  Tylenol does help with it, and made the pain manageable.

Looking forward to the weather warming up again, although overall the temps have not been as cold as it had been, no hard freezes so far.

Am so glad this year is almost over, it's just been too much.

Between having COVID-19, trying to work and keep working, plus the usual shenanigans, I just didn't have the chance to really do much with the blog.  And to that, I offer my apologies.

Now that the election hijinks are largely over, and despite what's being bandied about in the blogosphere, I don't think it's quite a foregone conclusion on who's won yet...too many loose ends to explain.

Let's hope the next year will be better.

Poking my head up - part 2: Losing my love, burglary, and the cost of doing favors

The holidays around December and January are always busy, but starting right after Christmas it really went sideways.

For over 4 years, me and my girlfriend Nicole have been together.  We've had our ups and downs as you would expect in any relationship.  She had a rough life and it showed in her personality, but it didn't stop me from falling for her, and she for me.

Around mid-autumn, her youngest son got into some trouble with the law and wound up going back to jail for a probation violation for about 30 days.  When it came time for him to be released on house arrest, he needed a permanent address.  He just married his girlfriend, but because some of her family that lived with her had prior felonies, he could not stay there.  So after my girlfriend asked me, I did agree to let him stay there using her bedroom while she slept in my bed.

After a few weeks, things came to a head between my girlfriend and her son, and she essentially told him it was her way or the highway.  He chose the latter, and left, thereby becoming wanted all over again as he violated the terms of his house arrest.  Nicole hated to do it, but she was not going to have her son disrespect her in our house.

The day after Christmas, after I came home, I came in to a nightmare.  My house was broken into, with the worse damage in my bedroom which was totally trashed.  My fire safe containing my Glock 17 and my dad's Smith and Wesson SD9, along with my dad's other weapons (shotgun, 30-30, and a 22 rifle) that was in my closet, along with the bolt carrier for my AR-15 carbine, were missing.  (The carbine was in another location and was not found)

I suspected that my girlfriend's son, or one of his 'friends', was behind it as he knew I had weapons in the house, just not exactly where.  I passed those thoughts along to the police when they came out to take my report.  A CSI tech also came out and dusted for prints.  That done, I did my best to clean up and try to move on.  Fortunately, Nicole was out of town visiting her older son and attending her daughter's college graduation from LSU, so she missed the excitement.

Shortly after she got back in early January, I got a call from the detective handling my case: Nicole's son was pulled over in Boulder City for speeding and he was arrested after the warrants were pulled up, and my Glock was found under the driver seat.  Of the other weapons and the safe (which had my birth certificate, some silver, and other things), they were never found.

The news had a sobering effect on Nicole, as she realized how betrayed she felt by what her son had did.  Soon afterwards, things really took a turn for the worst.

Nicole texted me a pic she took of her right ankle, with what looked like a rash from an insect bite.  She told me she first noticed it just before she came home from her trip.  I showed the pic to my friend Cindee (who is an ER nurse), and said it really looked like cellulitis and she should have it looked at.  Nicole and I went to the quick care after I got off work to have it checked out.  The doctor looked at it, confirmed it was cellulitis, and prescribed her antibiotics, telling her if it didn't clear up in about a week to come back and she will be admitted for more advanced care.

A few days later, the infection hasn't cleared up, and she began behaving strangely, hearing and seeing things that weren't there.  She's had a prior history of schizophrenia and it was mostly controlled, but obviously something was seriously wrong.  I won't go into further details, but finally on January 18th, she wound up being taken to the hospital by ambulance.

I was working my regular job on the night shift, and my dad told me what happened.  Since I was working a transport shift the next day for my second job, I figured I'd have a chance to find out what was happening with her.

I lucked out; the first transport I did was for a patient going from the VA hospital to the same hospital Nicole was admitted to, so as soon as I got my patient transfer done, I went to the triage desk at the ER to check on Nicole.  I met with Raylaya, another nurse I know, and explained to her what happened.  She then took me to where Nicole is, telling me that they were treating her for sepsis and had her intubated and on a ventilator, sedated.

At the point where I saw her, my heart dropped and I felt utterly helpless, seeing the love of my life in that condition really shook me.

Over the next couple of weeks, they moved her up to the ICU, and I did my best to try to be there every day.  I did let her older son what was happening, and eventually he and Nicole's daughter did come out to Vegas to see her, along with Nicole's best friend, Cookie, who lived up in northern Nevada.

After about 10 days, things were just not improving for Nicole, with instances of A-fib and V-tach occurring, along with deterioration of her oxygen saturation that prevented her from being taken off the ventilator.  Her daughter made the decision on January 30 to have her extubated and signed a DNR to prevent heroic measures being done.  This I agreed with as I knew Nicole would not want to keep living like that.

On the day they were to do it, January 31, I went to visit her in the morning after I got off work.  I stood by her bed, looking at her, and decided that I would not remember her like this, but as she was before she got sick, just like she looked in the picture below, which was taken about a year ago: 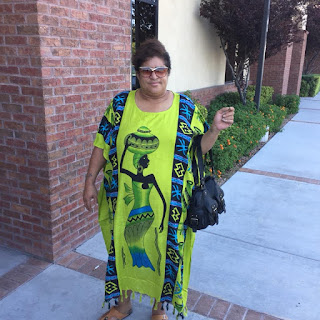 After I left her, that afternoon they disconnected her from the respirator, and just after 4 pm she passed from this world and entered the next one.

The loss of her really hit me when her BFF Cookie told me that Nicole was planning to ask me to marry her.  When I learned about that, which I confirmed through one of her other friends, I totally lost it and broke down in crying and sobbing which lasted a while.

I had taken some time off work in anticipation of a little get-away with Nicole, which would now never happen.  For about 2-3 days I was in a daze, just watching TV and sleeping.

A little post-script to this:  her son wound up taking a deal, and he is due to be sentenced on June 15.  I hope to find out how soon I can get my pistol back so I can ensure I stay armed in these uncertain times.